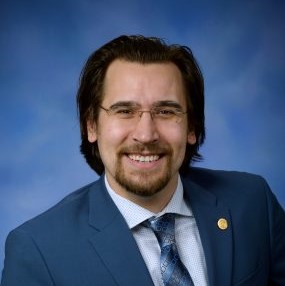 The bills call for ensuring all state taxes paid at the gas pump go to fixing roads, with a priority on roads managed by local municipalities such as counties, cities and villages. Over a three-year period, the measures would phase out the 6 percent sales tax drivers already pay on fuel purchases and replace it with an equivalent revenue-neutral fuel tax-generating approximately $800 million more per year for local roads.

The measures also fill in the sizeable gap left from the governor’s recent decision to bond for $3.5 billion for state-owned highways in upcoming years. That proposal only can address around 9,600 miles out of 120,000 total in the state and ignores driveway to highway roads people use frequently for a variety of everyday needs.

“The roads right outside our driveways are the ones that need serious attention,” Paquette said. “We must ensure the safety of the roads along our daily commutes. Those are the roads I get complaints about from local residents. I’m here in Lansing to stand up for their needs and that’s what this legislation will address.”

Paquette’s commitment to increasing investments in Michigan schools and students will not be impacted by the new legislation. Built-in safeguards ensure those investments continue, as sales tax revenue currently dedicated to schools from fuel purchases would be fully replaced.

“As a former teacher, my first concern is preserving education for future generations. These bills won’t take away any funding from students, but they will ensure the roads they take to school each day are free of dangerous potholes.”

House Bills 5582-87 have been referred to the House Appropriations Committee for consideration.

State Rep. Brad Paquette today was appointed by Speaker Jason Wentworth to serve as the chair of the School Aid and Michigan Department of Education Budget Subcommittee as well as vice chair of the House Education Committee.

State Rep. Brad Paquette, of Niles, is urging Gov. Whitmer to expand the Future for Frontliners scholarship to all Michigan residents who work in the health care industry, even if they work in Indiana, Ohio or Wisconsin.

State Rep. Brad Paquette, of Niles, today expressed concerns with the governor’s failed communication with local health departments as it pertains to her COVID-19 vaccine rollout plan and vaccine availability.

Rep. Brad Paquette of Niles today was elected to a leadership role for the Michigan House of Representatives’ upcoming 2021-22 legislative session.