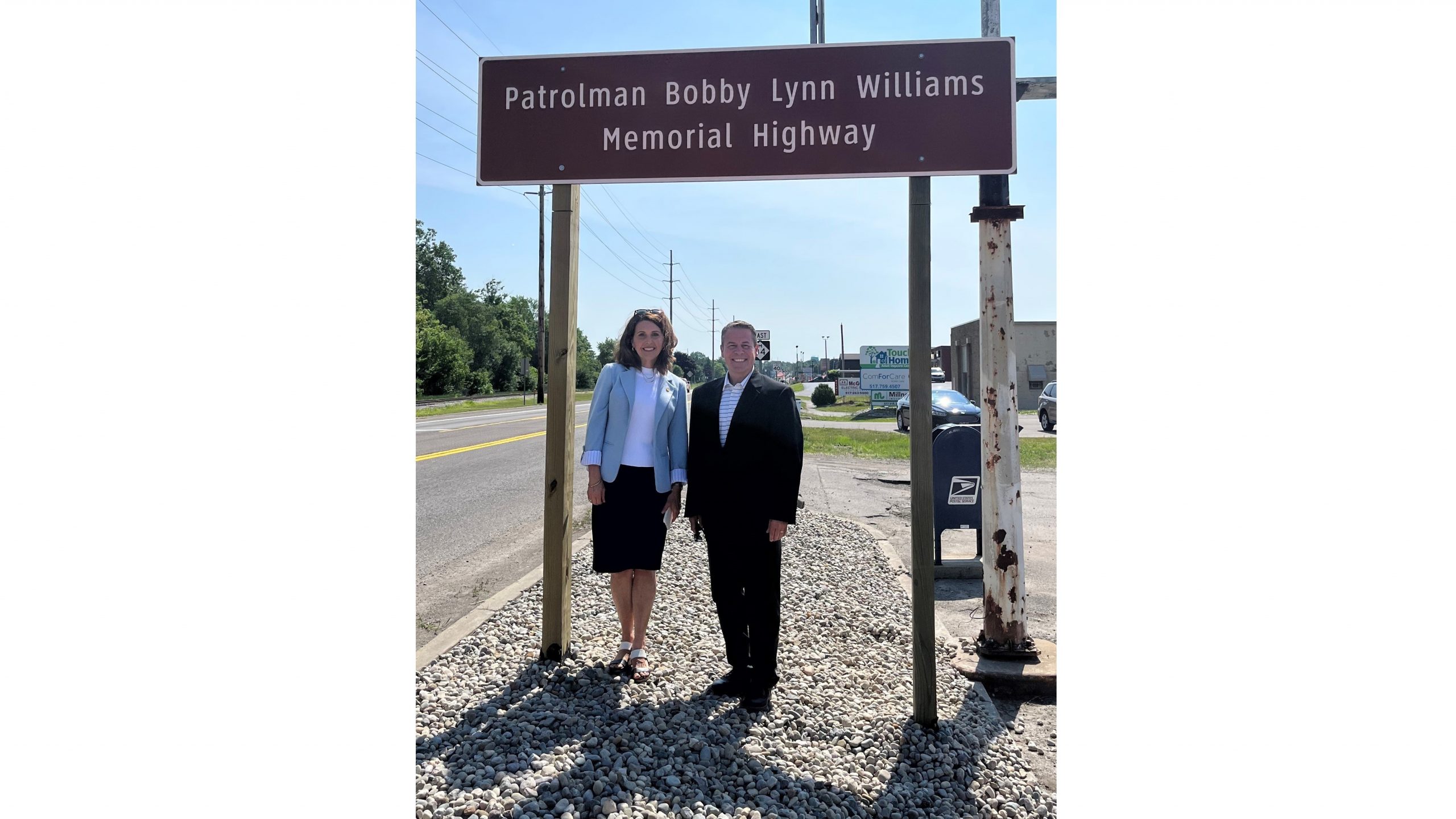 Rep. Kahle stands with Joe Williams, CEO of the Lenawee Community Foundation, beneath the new highway signs commemorating the life and legacy of the local Adrian hero.

“These memorial highway road signs honor our local Adrian hero, Patrolman Bobby Williams, who was killed in the line of duty,” Kahle said. “We can never repay him for sacrificing everything for the safety of our community. This highway naming is a small token of our gratitude so that his story and selflessness will never be forgotten.”

Williams served on the Military Police during the Vietnam War, where he was inspired to pursue a career in law enforcement after returning home. On June 30, 1975, after two years on the Adrian Police Force, he was tragically shot and killed at the young age of 28 after stopping a vehicle that had been involved in a robbery and kidnapping of a gas station attendant. Despite sustaining the gunshot wound, Williams was able to return fire, striking the tire of the vehicle and forcing the perpetrator to abandon it. The shooter was later apprehended and sentenced to life without parole.

Williams is still remembered fondly by his friends and family 36 years later.

“This ceremony honoring the courage, dedication and heroic legacy of Bobby Lynn Williams will forever be remembered in the hearts of all that knew and loved him. His heroic action likely saved the kidnapped gas station attendant’s life that day,” said Debra Williams-Reoch and Doug Williams, the surviving wife and son of Patrolman Williams. “The Williams Family is sincerely grateful to the State of Michigan, County Commissioner Terry Collins, the Lenawee County Road Commission and the Lenawee County Community Foundation for their efforts, as well as many others from surrounding communities.”

“He was a loving father and husband who loved the outdoors and spending time with his family,” said Brenda Emery, cousin of the late patrolman. “Even though his time spent on the police force was short, his final act was doing what he loved.”

The Michigan Memorial Highway Act, enacted in 2001, allows for the naming of bridges and highways within the state. Kahle encourages Michigan drivers to remember the sacrifices of heroic law enforcement officers whose names appear on memorial highway signs when they see them throughout the state.