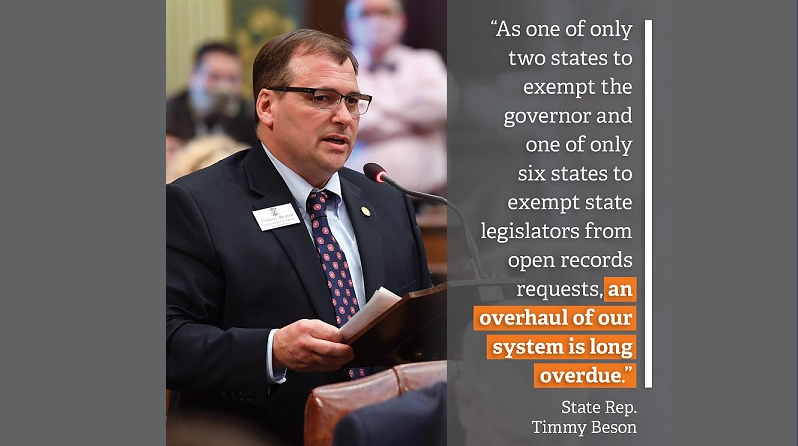 The comprehensive list of reforms within the package includes improvements to financial disclosure requirements, public record laws, ethical standards, bans on conflicts of interest, and more.

“I am proud to be leading the charge with fifteen of my colleagues, on both sides of the aisle, to reform transparency standards in our government,” said Rep. Beson. “As one of only two states to exempt the governor and one of only six states to exempt state legislators from open records requests, an overhaul of our system is long overdue. Our government salaries are paid using hard-earned taxpayer funds, and it is important we take these actions to restore their confidence in the state government.”

Some of the reforms announced today, including changes to the “lame duck” legislative session and the expansion of the Freedom of Information Act (FOIA), have already begun moving in the state Legislature.

Other reforms are new, including gift restrictions, lobbying disclosures, new penalties for state legislators who fail to show up for the job or act unethically, and permanent, independent ethics committees in the Legislature to investigate complaints and ensure compliance.

The reforms announced today have been drafted into legislation and will be introduced this week. A comprehensive overview of the plan can be found here.

Rep. Beson says the pandemic unemployment benefit, which continues through September, has an unintended consequence of dividing people and argues government should incentivize individuals who have been working.

State Rep. Timothy Beson today voted with a majority of House legislators to repeal an unconstitutional law Gov. Gretchen Whitmer used to impose harsh restrictions on the people of Michigan during the COVID-19 pandemic.

State Rep. Timothy Beson criticized Gov. Gretchen Whitmer’s veto of legislation that would have helped local businesses across Michigan reopen, rebuild, and get back on their feet while emerging from restrictive COVID-19 measures.

Rep. Beson talks about House passage Wednesday of the Unlock Michigan citizens’ initiative repealing the Emergency Powers of Governor Act of 1945 (EPGA), which the Governor used to issue restrictions unilaterally during the COVID-19 pandemic. The Michigan Supreme Court ruled the EPGA unconstitutional in October 2020.