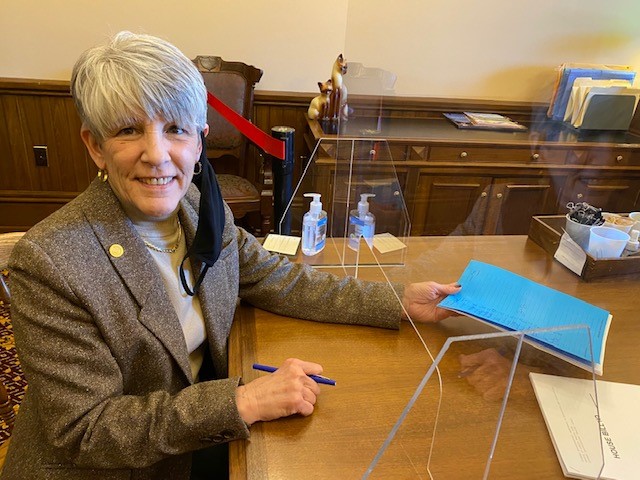 State Rep. Sue Allor, of Wolverine, submits House Bill 4099 to the clerk’s office at the state Capitol Building in Lansing. The plan is part of a bipartisan, multi-bill package increasing protections for human trafficking victims and empowering survivors.

State Rep. Sue Allor, of Wolverine, is part of a new, sweeping bipartisan plan to support survivors of human trafficking and help them rebuild their lives after escaping their captors.

In preparation to reintroduce her portion of the legislative package, Allor underscored the impactful testimony she recently heard from survivors and others during a House Appropriations Subcommittee on Health and Human Services.

“We must work to empower survivors who have gone through the horrors of human trafficking by giving them justice, as well as putting them in a position to break free from their harmful past and live successful lives going forward,” Allor said. “The stories we heard are tragic. My heart breaks for these individuals and their families. These reforms are a massive and meaningful step forward for many.”

Michigan House acts on Unlock Michigan initiative State Rep. Sue Allor, of Wolverine, today joined colleagues from both sides of the aisle to formally approve a petition repealing the 1945 Emergency Powers of the Governor Act. Gov. Gretchen Whitmer used the act to declare an extended state of emergency during the COVID-19 pandemic and issued […]

State Rep. Sue Allor, of Wolverine, on Thursday joined House colleagues in approving a budget plan for the upcoming fiscal year that makes record-high investments for K-12 students, while helping the state emerge from COVID-19.

State Rep. Sue Allor, of Wolverine, has introduced the Women’s Right to Know Act – establishing additional tools for pregnant women. House Bill 5086 provides information about lifesaving abortion reversal pills as well as heartbeat and miscarriage awareness, while creating a website with information on prenatally diagnosed conditions. “I expect this bill to earn bipartisan […]