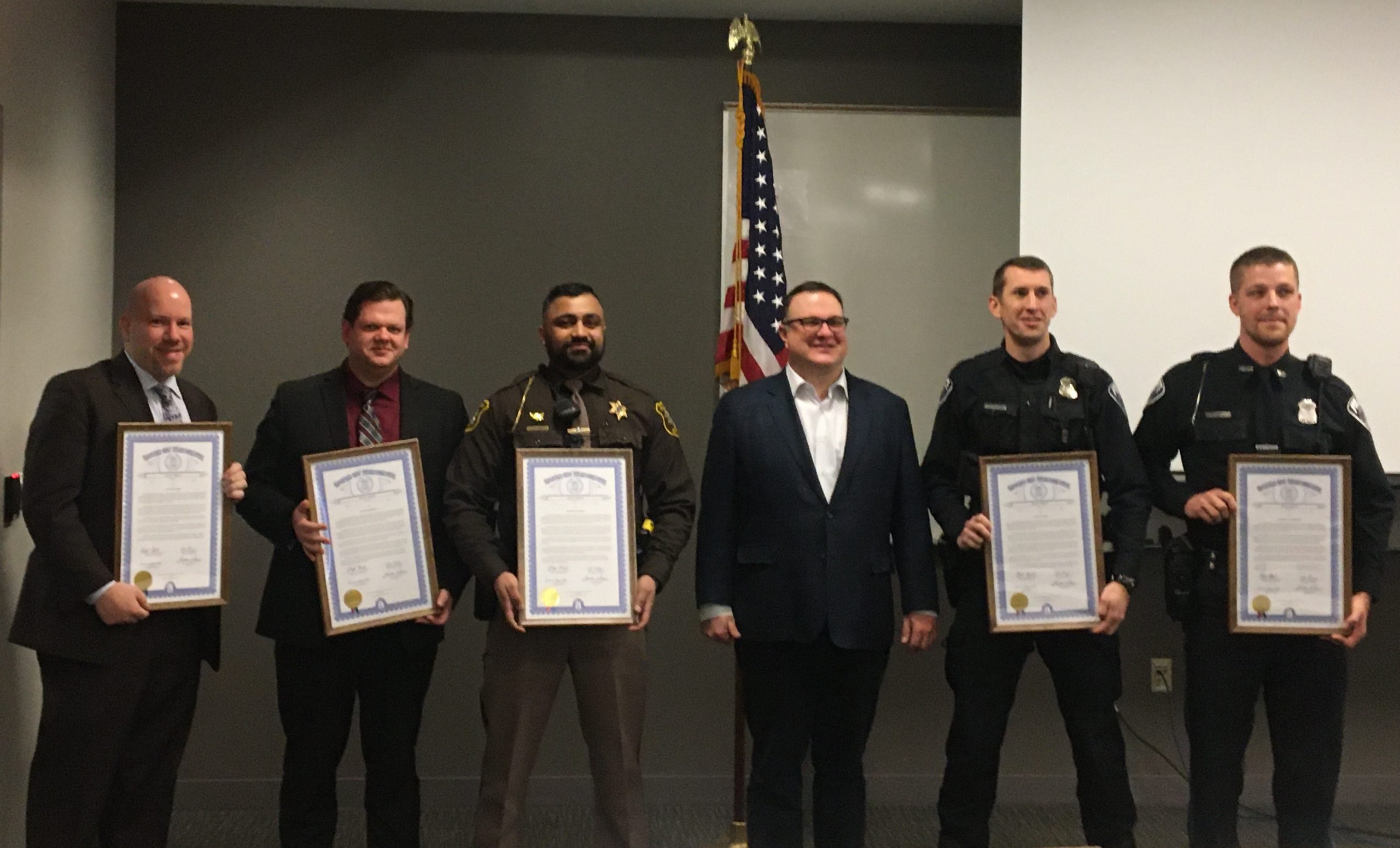 “We know what a tough job these officers have, and there are so many that go above and beyond every single day,” said Rep. Hall. “We wanted to recognize a few, really as a tribute to all of our local police officers.”

Each tribute congratulated the officers on their outstanding work in law enforcement and recognized their sacrifices, and the responsibility and dangers inherent in police work. Each tribute also mentioned some of that service from the past year.

Detectives David Homminga and Jon Pignataro teamed up to solve an Emmett Township murder. Their thorough and exhaustive investigation resulted in an arrest.

Deputy Suleiman Sumbal assisted other police agencies in apprehending a suspect who had fled after kidnapping a young child. His work led to an arrest and the safe return of the child. All three were also honored with a Calhoun County Sherriff’s Departmental Citation Award.

Officer Matt Potter, in over a decade of service with the Marshall Police Department, is a two-time Officer of the Year recipient and has also received one Lifesaving Award. In addition to his road patrol duties, Officer Potter is a seasoned Field Training Officer and a Crisis Intervention Officer, conducting many mental health interventions over the last year. In June of 2021, Officer Potter assisted with a water rescue of three kayakers on the Kalamazoo River, locating them as they clung to a downed tree.

Officer Brandon Vandenboss’s proactive enforcement leadership has earned him the honor of being named the Marshall Exchange Club 2021 Officer of the Year. His commitment to learning and expanding his role has resulted in the recent completion of Crime Scene Investigator Training. Officer Vandenboss will be attending a Field Training and Evaluation Program and will be relied upon to help teach and guide future officers.

As he presented each tribute and thanked them for their service, Rep. Hall listened to each officer as he asked them about some of the events that transpired as they did their jobs protecting our local communities.

PHOTO INFORMATION: State Rep. Matt Hall (center), of Marshall, is joined by (from left) Calhoun County Undersheriff Tim Hurtt, Detectives Jon Pignataro and David Homminga, and Calhoun County Sheriff Steve Hinkley as part of National Law Enforcement Appreciation Day. The detectives were presented tributes by Hall for their work and dedication after teaming up to solve a murder case in Emmett Township.

PHOTO INFORMATION: State Rep. Matt Hall (second from right), of Marshall, is joined by (from left) Calhoun County Undersheriff Tim Hurtt, Deputy Suleiman Sumbal and Calhoun County Sheriff Steve Hinkley as part of National Law Enforcement Appreciation Day. Deputy Sumbal was presented a tribute by Hall for his work and dedication after assisting other police agencies in apprehending a suspect who had fled after kidnapping a young child. Sumbal’s work led to the arrest and safe return of the child.

State Rep. Matt Hall, of Marshall, today said plans he developed and voted to send to the governor’s desk have delivered transformational economic opportunity to Michigan – and will continue to do so in the future.

Rep. Hall: Governor must do more on taxes to help people, families

Rep. Hall testifies on plan to bring “jobs of tomorrow” to Michigan